Regarding writers, I hear what you're saying Matthew, about being wary about turning toward the academic. I guess my thinking was that it would be cool to have someone like Mr. Murphy tell us how brilliant we all are, and how important it us for us to be exercising our Catholic imaginations. But that would take no more than a few hours, and we're going to be together for a couple of days. (Actually, see point 2 below.) I'll hold off on an invite. A potential invite was why I was wondering how many writers could be accomodated. Space and milieu play a big part in the "feel" of a gathering but also effect the practical context. I also have to be honest about a couple of things:
1) I am having a hard time with the idea of a writing exercise. I write what I write and I have a hard time writing outside of that. I don't have enough time to write as it is and doing something that is not for (potential) commercial consumption is hard to get motivated for.
2) I like the idea of a gathering of varied voices, with creative writers making up the majority of attendees. What I found most valuable last summer was simply sitting around the table critiquing each others' work. In my mind, the ideal get-together would be centered around that. Each of us would send out something a month or two in advance and we would have our thoughts assembled before we meet. At night, one of the attendees would lead a discussion while we drink. Any free time could be spent wandering or talking. My thought was that if someone like Mr. Murphy was invited, he would have a piece of writing for us to critique (which would probably be academic, but that is okay from my persepctive,) but that he would also be a good critiquer and a potential presenter.
3) Agitator! I feel terrible saying this, but I wish we could keep the meeting at Johnsonville. I think it provides the best physical environment for a gathering like ours and the location, being more central, is less overwhelming for me, (of course, me, me, me) coming from Maine, but also for any potential invitees from east of the Mississippi. I want for Gerasene to be as lively as possible and it is important to have a good group of attendees. I know why CA was proposed (cost and timing,) but at leats in terms of timing, I will just throw it out there that late September/early October on a farm in WI would be pretty sweet.

With love and respect,
Andrew
Posted by Andrew McNabb at 4:01 AM No comments:

My more than two cents 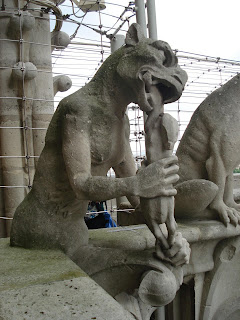 Having already sent this to you by email, I thought I might wade out into the waters of bloggery by reprinting it here...

Regarding a theme for Geresene 10, my own proclivities, of course, are to dig into the Medieval or Classical stuff for a theme – but that said, I’m 100 percent behind the Percy idea – and would even hope that some of the Korretiv Kadre could make it to Gerasene 10.

I think we want to keep in mind as we go about coming up with themes a couple possible solutions to future confusion:

a) 21 fingers (winner names the theme)
b) Each member of the “core” – I.e. us happy few - takes a turn each year naming the theme and assignment – cf. Deep Springs College for its autocratic/autodidactic/autoagricolic (?) model.
c) Democratic vote (in case of tie, refer to “a”)
d) Consensus
e) Stick it on our SMOC (Significant Member Of the Clergy) (he’s got the clear authority around here anyway, we might as well put it to use!)
f) Use the obituary (e.g. this year’s theme: J.D. Salinger (not that we would!))
g) Sacrifice our pens and laptops to the Gods of Thematic Writing Conferences and see what favors are bestowed…
h) Call a phone number at random in the Gary, Indiana phone book and ask the person on the other end who his favorite President is – take the number of that President and transpose it to the corresponding Super Bowl and take the winning team’s mascot as the theme.

Now, Millard Fillmore was the 13th President of the United States.

The 13th Super Bowl was played between the Dallas Cowboys and the Pittsburgh Steelers (Jan. 21, 1979)

The theme of Gerasene X is “Steelers.” It then becomes our task to figure out what the hell that means….

This would actually work – and incidentally this year - 2010 - will be the only time in history that the Super Bowl and the Presidency share the same number: 44.

In addition, I don’t need to tell you the fitting implications of determining our theme from the auguries of the Pigskin…

I’m partial to this last method – but as a close second, I’d suggest “b” with a healthy dose of collaboration thrown in for good measure (to help shape and guide the parameters of the theme, etc.).

Well, at any rate there’s my more-than-two-cents. 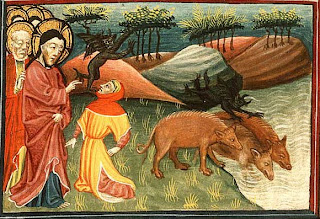 Thought this might be a good place to share our thoughts and feelings!
Posted by Matthew Lickona at 9:19 AM No comments: