Doggerel for the opening of Gerasene '10

[With apologies to everyone who attended and so had to listen to this before they even started drinking.]

Well, here we are again at the shindig called Gerasene,

And yes, it’s the sort of name that starts you wondering who among the illustrious souls at this table will be the first to commit material if not formal heresene.

Because we’re here to talk fiction, and most fiction I can think of off the top of my head which admits the possibility of God’s existence does so in order to examine the ways that God is out to slam us, or at least put us through the wringer a little bit,

Which might tempt one to think that God is a bit of a shit.

But of course, nobody here actually thinks that, so we smile and nod and say “mystery must there be” and nod sagaciously,

And even if we did think it, everybody here knows that if you’re going to lash out at the divine creator of all things, you ought not to do it ungraciously.

So if you’re frustrated with God’s silence in the face of human suffering, you don’t write an angry letter to Rome about it

Instead; you sit down at your friend’s house in La Mesa, California and write a poem about it.

Or a Southern Gothic tragedy about a man who had his right hand bitten off by a German Shepherd who was guarding the local Catholic cemetery and is now consumed with the self-appointed task of preaching about the God who isn’t there.

Hell, you might even knock out a parody profile for Catholic MisMatched

You can do whatever you like here, really –the main thing is that you actually do it –

So that we don’t wind up with our usual closing comment of “I wasn’t really sure when the writer’s conference began, but I do know that it was over before I knew it.”

There is one more thing I’d like to add, and I do it at the risk of coming off as some kind of Jamesian prig,

And it’s this: that if I was setting out to found a Catholic writer’s conference that would attract the best and brightest the world had to offer, I might select as my gathering’s namesake something other than a possessed and consequently suicidal pig.
Posted by Matthew Lickona at 9:54 AM No comments: 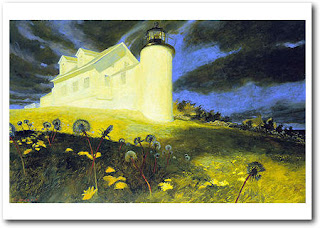 Dry fruits are divided into three types: dehiscent, in which the pericarp splits open to release the seeds; indehiscent, which do not split open; and schizocarpic, in which the fruit splits open but the seeds are not exposed.... Some indehiscent dry fruits are dispersed by the wind, assisted by “wings” (elm) or “parachutes” (dandelion)...
--Ultimate Visual Dictionary, “Dry fruits”

And July comes along, a breezy parenthetical
(To whisper away the dew point with fire's nadir),
With heavy brush stroke, to strike off time's thick, empirical excess.
It declares independence from the other months,
Although as summer's island it unites the year
And clings to brocaded principles of freedom
By floating away in snowy white depictions.

Thus, July derives its light from the spill-pattern
Of dandelions -- an arranged dispersal of sorts
That falls like text across a page, the thin dribble of oils
Stretched beneath a sleeved frame: yet positive ochres
And absolute cobalt offer no guide to the craft
Of cloud, their hulls tarred in onyx. Surf-white stone
And storm-black steel stand between flowery syntax

And utter wreckage. A cold high pressure love-tangles
With warmer low pressures; darkness with light; shadow
With sudden change to foreshortened light; wind
With the essence of memory (like limp lighthouses,
Each dandelion wiggles in offshore currents); and day
Emerges from time’s more inner, uncalendared instances --
As between surfeit of weeds and surcease of bloom….