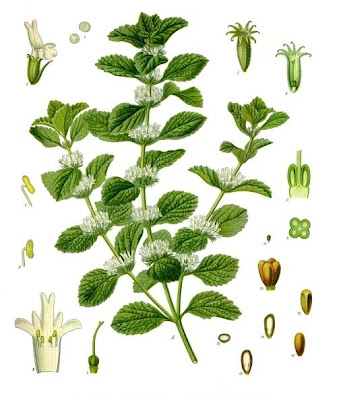 I thy servant will stay instead of the boy
in the service of my lord...

White horehound bodes a bitter exodus.
Horizon-bound and slave to winter’s ease,
It sees itself the hair shirt of Horus,
Tickling scythe’s demand for easy excuse….

Easy, too, Pharaoh steadies hand and heart,
Hovering over herbs’ biting leaves to hold
Osiris purged in vase and set apart,
Reversing a Jew bought with a Jew sold.

Egypt embedded horehound with importance –
Half the time in hope; in faith to make a guess
Otherwise. So blood takes its fill of sins,
Urging dawn to bloom the day with darkness.

Now bitter as an herb, poor Juda says,
“Death’s my brother the day another dies.”
Posted by JOB at 1:39 PM No comments: 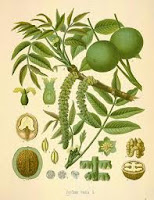 “Is this your young brother,
of whom you told me?”

Walnut trees thus bear up the nuts of Zeus
And hang down in lusty strains of godhead…
Love speaks all languages nevertheless,
Neglecting neither native tongue nor blood,
Underwriting Joseph as the alien
To transcribe Israel’s love for Benjamin.
Posted by JOB at 1:27 PM No comments:

And the third day he brought them out of prison
and said, Do as I have said
and you shall live, for I fear God.

Violet, Father Zeus had splayed your purple
In Io’s sorrow, violating her way,
Obliging her to eat your life. Each footfall,
Left you cowed with bruised inconstancy,
Eliciting your obedient grief
To flee a passing god’s momentous might.
Veronica, though, hard pain’s high relief,
Expressed with easy petals a complete
Redress of sorrow’s portrait, facing God –
Obedience, her sunlight’s own reward,
Now again is bearing victory’s return.
In a similar passage, Joseph stored
Corn and kine, restoring Egypt’s common good,
And freed his brothers from their hungry scorn.
Posted by JOB at 10:25 AM No comments:

And he turned his name,
and called him in the Eyptian tongue,
The saviour of the world.

Viburnum takes its own wayfaring way
In earnest, honest in fen, field or farm,
Burgeoning arrow-true or queered to stray
Unencumbered by season, soil or worm.
Regaled as moments turn with burning suns –
Now hot and high in June, now low and cold
Until November’s trimmed orbit – at once
Met everywhere and everywhere exiled.

Viscum, another such broadcast outcast,
Interprets seasons – intertwines them with myth:
Sticking to sleep’s twiggy limbs, mistletoe’s curled
Confusions kiss around the cursed and blessed
Until Joseph cursed his journey, blessed his wealth,
Met a pharaoh, and dreamed to save the world.
Posted by JOB at 7:31 AM No comments: 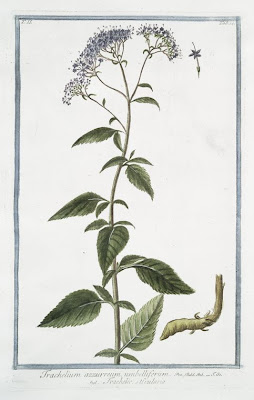 "The Hebrew servant thou hast brought,
came to me to abuse me."
Umbrella flower, shut within your throat,
Myriad hues await release once spring
Became a captive word, stripped of its coat,
Rendered mute by winter’s wasted making.
Eventually your umbels fall away
Like timbered standards. Still, you would maintain
Legions against a late October’s day
And hold your ground among the autumn slain.

Flowered doctrine leaves a signatory note
Like Adam’s apple choking off the tongue.
Of course, your yawning parasols can cure
Whatever starves the year: by spring your song
Endures the lies that swallowed Putiphar –
Revealing truths that stuck in Egypt’s throat.
Posted by JOB at 7:27 AM No comments:

January: "If Once You Have Slept on an Island" 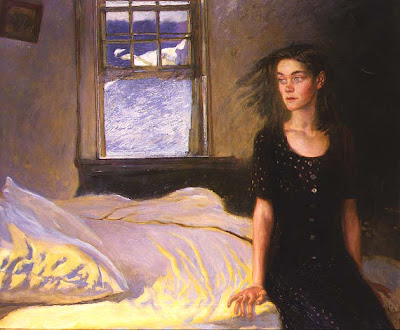 If you wish to avoid foreign collision, you had better abandon the ocean.
-Henry Clay

If once you have slept on an island, new
With year, and January’s doorways, windows
Opened out past the beach, in past the curtains,
Then you know how even in sleep the sea
Ceaselessly commutes, surrounding each day
With surf's squared-off epiphany at your door.
You wake and drown in garnets at sunrise,
Awake in cool dampness beneath the sheets,
Missing what it said, but certain of the voice –
That same dampness which whispered you to sleep.
Then you’ll have found this blue and green island
Which surrounds you, split in your eye, sundering
Your time, bringing each weekend on the wind.
From the edge of your bed, edge of the world,
You hear oceans pegging down your corridors
Of slate-grey morning. Here, the faint odor
Of last night’s cooked sole hangs like gentle
Aftermath, and lost quests for old romance
Surge past bluest dreams, creak with the floor joists,
And hiss in the dune grass under the porch...
Thirty-one days hath your island. An un-
Even split – against the shoals on which you dream:
Where it is always winter and the beaches
Always filling with cries, gulled and echoless;
Where departures and arrivals are all the same,
All run to one featureless promontory
Spied from the ferry, and your heart races
Every time you return, each time you go –
And scrub oak and snarled patches of pine find
The primal cling of anticipation’s root
To bald outcrops of rock – old as the new year.
Posted by JOB at 7:34 AM No comments: 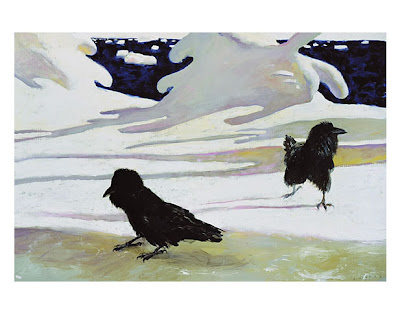 There is something about winter
which pares things down to their essentials
a bare tree
a black hedge
hold their own stark throne in our hearts.
-Moya Cannon

I
- “Maine always takes place in an ice storm, like an animal revolting against itself...”
- You say to me as two unpaired, wind-scrubbed crows outside our window pick along the fresh-packed tundra of harbor scenes: prosaic villages sidewalks, yards and streets, rendering the year in its annual arrears, thinned out, now thinner still, the only tension found kissing at the heart’s one and only breaking-point, white fields piling up with winter’s paperwork, untended, waiting.
- We turn back to our tea.
- The business on the table is packages and overspent budgets like public confessions rolling out toward the frayed ends of ribbons and scraps of wrapping paper – shavings from a golden bough.
- But another glance outdoors as I churn amber with my spoon:
- Inky in character, each crow, a black pearl harboring icy onslaught in its eye, casts its cares toward a more corvine heaven....
- A murder beyond the pine row; a singular black drill sergeant warding the day on toward the cold country's parade grounds…..
- Cradled in snow drifts, black plumage strikes against the snow (opened-ended parentheses in winter’s paragraphs...

II
And in day’s continuous count down, the December sun’s
Low feast of lights trims back old New England
And her long year’s immoderate growth
To that pure Monhegan island
Of January rock - as if paring away
The isolation of our winter
To the waiting arms of discontent.

III
Waiting. We are waiting now too. So, we wait.
That’s the poor trick we’re learning lately,
As history secretly fashions a cold night
Into the mystery-image of snow’s god
Who falls again to earth, and dead grass
Conceals a cold god in winter solstice,
Discovering simple solace in an ice storm.

IV
And you think again to speak against these rookish souls,
Daring to tease out their cyclic devotion to sacred time)
As if Christmas is not the beginning of the end for death
But only revision of purpose, a return to household chores.
So the year rolls on ignorantly toward sanctuary’s end
But we remain haunted by our bodies, unable to escape
The holy tension of present time, indivisible by years, months or days
Even as the heavens' turquoise crown of stars these last few nights
Is all holocausts -a solemn reaching down with northern lights.
Posted by JOB at 8:58 AM No comments: 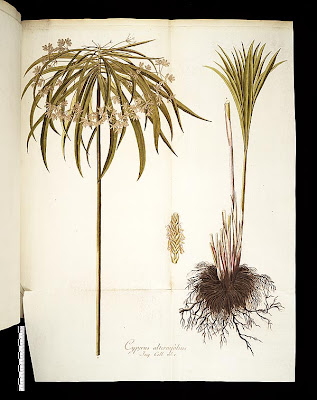 Why is the partition divided for thee?

Umbrella plants in somber autumn’s room
Mistake themselves for ancient furniture,
But mean to mirror seasons' more secure
Reassurances – how summers resume
Endlessly in squat terra cotta pots.
Leaves that rise will fall. A shadow’s life sustained
Leavens daylight’s entrances – as unfeigned
And inevitable as our own exits.
Pre-possessive creatures, we make our terms
Lie in dusty corners, sheltered in fear.
As we look at death, though, – its cold room confirms
Nature's not potted like a plant – no more
Than Thamar’s womb, enclosing Juda’s house,
Sought to thin the blood of her father-spouse.
Posted by JOB at 10:48 AM No comments: