The 2010 Gerasene Writer's Conference, Second Iteration, Will Take Place Sometime Around July 26. Who's in?
Posted by Matthew Lickona at 10:47 PM 5 comments: 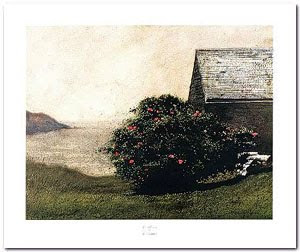 Ask me no more where Jove bestows,
When June is past, the fading rose...
-Thomas Carew

And somewhat like summer’s first, slow blush of island roses, full of youthful excess
Embodied in a crimsoned bush, boutonniere for broken-down barns, the boarded-up proof
That dedicated sunlight, blanketing wind with its blank and wizened whiteness,
Was ever the strongest message sent against the hey-nonnies of the marriage season.
It took all summer to whitewash the roaming empire of clapboard and tarred roof.
Meanwhile, June, just back from first-year college, took to the island like a prom queen,
In slow procession, with all of June's munificence and mellow magnitude in season:

There, stretching down either end of her familial island’s embracing shoreline,
Mornings, we would watch sail boats blossom and soar into view on the saw’s edge
Of waves until dusk, trimmed and tacking, grew faint before beach fires like bold sunshine
Struck on scraps of canvas. Arm in arm with first kisses, we reached for night’s face awash
With stars, speculative with amateur wedding plans, beginner’s love, the scurrilous hedge
Of success, until all bets were expectantly off next day. The sea whispered a wish
For flag pole days of coming summer, June’s face prickled with freckles as if awash

At our parting with a broken blush, until later, later, late spring urged the island
On its visitors. June was a girl, yet she took a woman’s time, the rolling approach
Of a long wave tide-stretched as on a loom, always reaching slowly for joy, its diamond
Dislodged lovelessly at last with one more sunny nudge of surf... But I knew June
First as sister to Julius, a classmate in medical school. We’d dive summers and poach
The warming Atlantic for oyster-beds. Scalpeled pearl of day and night’s gauzy moonstone --
These glimmer fitfully from the murky fathoms of my youth, lost as love in June.

On the island, light climbs to its midpoint more beautifully, but never burgeons
Into beauty itself. I have not returned to it these long summers since. The world revolves,
After all, not around the rose bush as axis, but around the steadfast hands of surgeons.
June gave me just one summer, my farewell full of cold, grey sea. But perhaps love took
Up time’s operation with these same false kisses and feigned heart -- as a doctor solves
His problems with narcotic and steel singing their duet where the heart most aches,
Our brief union’s sore gratefulness justifying June, the roses she gave and the time she took.
Posted by JOB at 11:39 AM No comments: