May and Jamie Wyeth 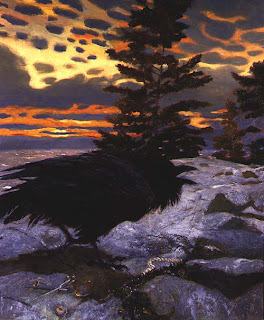 May: "The Thief"
May is a pious fraud of the almanac.
–James Russell Lowell

Might and may are pigeon feathers which a crow never uses.
No subjunctive bird is he, being real,
All stealth and secret urges around his charcoal-rough edges:
Shears, watches, keys, a brooch and gems stashed to reveal
That what his pinched emerald eye sees is really already his.

**************
His snow-tested hypothesis is proven
By mountains – the broad and open barrow
For his treasures, his rifled and riven
Objects – like Aunt Clois’ silver-plated shears
Without which she must remain immortal,
The final cut to her yard-cloth of years
Awaiting keener edges that narrow

To point a compass-like measurement at
Grandma Penelope’s cameo, hoard-nestled,
Lost these fifty years since a picnic junket
When her lover tied button thread around
It to hang long from a tree-limb. Wrestled
From the wind, the brooch’s depicted eye wound
In a teary glaze of pearl, as if penciled

To trace the sad fire-dance of earth, sky and sun.
Snatched too, Uncle Kronaw’s timepiece, a gilt
Oyster, gaping, its iron moil of gears spun
Out, secreting a cannibalistic rust
At the mouth. Still, its polished gold shows earth’s tilt
In mantled casement and spring-loaded crust
Where the declarative crow’s will still finds fault.

**************
But might is and May becomes his whole world’s undivided sums
(Magpies are meant for doing, not parenthesis)
As morning might turn clouds to crumbs of thick clunky diadems
And maybe the White Mountains' key success is
In unlocking a late spring from the raven-black of his wing.
Posted by JOB at 7:29 AM No comments: