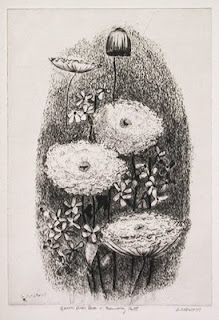 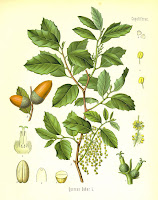 But Lia was blear-eyed;
Rachel was well favored,
And of a beautiful countenance.

And he saw in his sleep a ladder standing upon the earth
and the top thereof touching heaven;
the angels also of God ascending and descending by it…
Pansy, everywhere your sprout is recalled,
A promised thought renewed in remembrance,
Nodding your head at dawn and dusk, you build
Stems up for an Olympian entrance;
You yawn your face at sun and moon, the same
Paris basks its herb-proffered whorls in, twinned leaves
Arching rung by rung up the air. Its stem
Rise above Himalayan slopes, it saves
Itself, high and rare, in God’s divine air
Soaking the sun’s rise and set with the very
Pink and meat of dreams. So Pinks too cut their
Incarnate teeth on day’s divinity,
Numbered among an avalanche of envoys’
Καιρός! – ΧΡ! in endless alleluias.

It was the will of God
that what I sought
came quickly in my way.

Plumbago, what eye has not seen your bloom
Laze along a hill, lighter than the lead
Unearthed in ancient pipe that sluiced your name,
Misleading as Jacob kidding with kid’s hide?
Blind old Isaac believed the things that seem
And died of heartbreak the moment his shade
Grew beyond illusion’s moment in time –
Oblique as leadwort blueing a hillside.

Pawpaw echoes the same native neglect
As named, it can trick out true papaya
With syllabics like a mess of derelict
Pottage such as cleverly bought Esau
At cost to eat a la carte his birthright -
Won by Jacob with Isaac’s appetite. 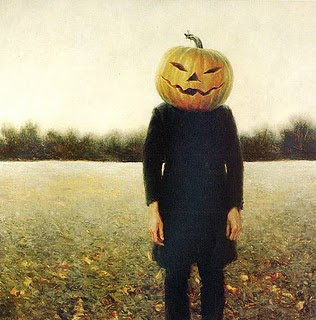 What of October, that ambiguous month, the month of tension, the unendurable month?
- Doris Lessing

“No, my brothers, my sisters, some kiss to kill a pumpkin’s
Full moons or boyishly kick them to shattered shards -
Some young things which take crepe and cardboard for skins
To make out pirate hats, robot heads and leopards,
Hold ghostly linen poses and suppose one’s dead kin’s
Plot thickens them in their white-picketed grave yards. . . “
¤
It is October in October country, where
A preachy preacher preaches
With black fashions and a darkly held air
On why God fell for his creatures
And why the Fall is all too cold and rare
For Jack-O’s lantern-jawed features
Too long fermenting in his own sugar.

Here are time’s border lands, where perhaps a pheasant
Will stick its garrishly-ringed neck
From beyond the woods, bejeweled crescent
In quick, flightless, tremulous trek
Through the hunter-harried air, chill, pleasant,
Demanding an awful respect
For mercury’s merciful fall and dissent.

But forget it, Pastor Pumpkinhead. Make the Fall
As darkly, grotesquely comic
As you want, the door in the garden wall
Rusts fast with frost and still will stick
On the hinges of justice – so we all
Retain enough skull flesh to prick
Even consciences rendered skeletal.
¤
“. . .And so, daylight saves its ends like straw fired in paraffin
Replacing a clergy’s empty head inside a pumpkin
For the hollowed-out evenings before every Halloween
To ignite the night with a jagged, opal-fired grin. “
Posted by JOB at 1:13 PM 2 comments: