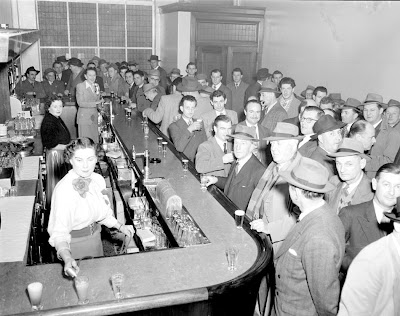 The Burgundy was Lytlewood’s retreat
From larger universes. Renting peace
Of mind, he found his refuge bittersweet –
At once a cure for the common disease
Of life, and sure reminder that when lease
And rent come due, the vacancies remain
The first concern. In its halcyon days
The hotel spilled with bouquets and champagne;
Today, it’s real estate prostitutes Mnemosyne –

A fact the hotel’s current state drove home
As Lonnie drove Lytlewood into view:
The faded facades of dismantled Rome
Could never have filled Caesar with more rue –
Its garish art-deco and neon threw
Enough electricity to trace its dark
Abandoned silhouette. As evening grew
It spread its stain against the sky in stark
Majestic hints of heydays and high water mark.

With tears of practice, Lonnie got the hang
Of driving without thumbs. – But Lytlewood
Soon realized he wasn’t worth a good damn
For carrying bags – This bed is mine I made...
He was left with baggage at the colonnade
That announced The Burgundy’s grand entrance.
As Lonnie went to park in back, he stood
And saw the hotel’s old ways – a sentence
Scrawled above the arch to welcome with faux-pretence:

Check Your Cares At Door, Ye Who Enter Here!
With a short strained sigh tucked under his breath
Against nostalgia, he opened the door
And stepped inside. In crossing underneath
The jamb, he thought he heard the hotel breathe,
Exhaling years and years of quiet years…
The lobby’s marble floor echoed with
His falling steps – like mourning – without tears
He thought – or echoing for years and years. And years…

A furtive movement caught his eye: someone
Retreated into the office behind
The desk – as if to avoid detection.
But Lytlewood was rather disinclined
To follow up. Instead he looked to find
A concierge or bellhop. Then the bar
Recalled him to its modest doors; they dinned
The clank and hum of business, familiar
Enough to guide him back to find his old north star.

He was too weak with his sickness to think
To want his old proclivities: a box
Of choice cigars beneath his arm; a drink
In hand to start the night…Scotch – hold the rocks!
The Burgundy’s bar – called “The Legless Fox” –
Had naturally attracted Lytlewood –
Though few guessed his big shoes would leave the tracks
Of little Reynard behind...And once, I could…
He weakly pushed the swinging doors and stepped inside.

There were only three others in the room:
A bartender toweling a whisky glass
Behind the bar, another pushing broom,
His back to Biggy, and – seeming out of place –
A single patron crouching comatose,
Nursing drinks at the bar’s far end, his mood
As black as his attire. And then a voice
Yanked at Biggy with its unlikelihood.
It’s good to see you again, Mr. Lytlewood.

As Lytlewood knew that the gangster’s life
Was full of strange and bloody things, and one
Was just as soon accustomed to mooncalf
Grotesques, stupid lore and superstition
Of underworld and overlord, as to gun-
Downs and garottes, the sign and sacrament
Of thuggery itself: still, the phenomenon
Appearing now before his eyes was different –
Virgil Strong – not quite spirit, not quite corpulent.

It was Lytlewood, after all, who first
Appealed to Music’s Machiavellian
Propensities, suggesting, worse to worst,
Divine authority cows even villains –
“A taste of blood will only whet the thirst,”
He said to Music, “but feed the will on fear
And even vice and crime are all but forced
To pay the gods respect.” He helped, therefore,
Convert dishonest souls to Music’s strident care.

Oh, sir, the ghost continued, why surprised? –
You act as if the boys had hacked your tongue
Instead of mine. But you must have realized
We’d be waiting here – with spring in step and song
In heart – and ready to bring you along
With us. But Lytlewood simply stared
Down the bar, long and cool. Don’t get us wrong,
Mr. Lytlewood – no expense was spared –
If you’re to die, we’re here to make sure you’re prepared.

It’s Music’s little pastime, Lytlewood
Suspected – testing him around the edges,
To see if age and pleasure had destroyed
His hardness, mollified his ancient grudges
Against the world. If Lytlewood budges,
So Music speculates, then who else might
Betray me? Sham sureties, bogus pledges –
Surely these more than bullets took the fight
Out of Music? Still, there’s something here that’s not quite…

“Say, Virgil, you keep referring to ‘we’
And ‘us’ – but I see only us in the place,”
The gangster thought to say – with levity
To show he’d play it out. Don’t remember us,
Good man? – Remember Eddie the Puss?
That’s Eddie Pusarchik right over there
At Table Eight. Recall how you hopped him
Up on smack and made him rape his mother?
I think he whacked his father, too – for good measure.

Then standing over there by the jukebox –
That’s Tony Romula. No? You had him kill
His brother over phony rotten stocks
In city real estate. Talk about shill
And shell games: A regular Cain and Abel,
Those two. If Jimmy hadn’t played both ends
Against the middle, skimming from the till
On top of all…I always said, you bends
The rules enough and nothing in it recommends.

And Hector “Horsey” Harriman is here –
The stable trainer for Mr. Music’s
Arabians? If I’ve the story clear,
The bookie – Parrish Bowes, was it? – tried to fix
A race in which Achilles’ Heel, Music’s
Prize thoroughbred, was running. Hector slipped
It’s feed a mickey; Bowes slipped him greenbacks;
And didn’t Music have you have Hector strapped
And dragged behind Achilles ‘til his spine was snapped?

Oh, he’s there by the cigarette machine
With Bowes now…What became of Bowes again?
That’s right. Once you got Hector to come clean –
Before his last ride – you “found” Parrish in
Bed, committing fornication
With Mr. Music’s mistress. What a knack
You had for fabricating a fiction.
Didn’t you show him counterfeit Kodaks?
Is that what makes a fellow swallow Clorox and Ajax?

As Virgil Strong continued his catalog
Of Lytlewood’s auld lang syne alumni,
Biggy’s gaze began to drift like fog
From face to ghostly face to – suddenly
He sensed almost simultaneously
Two curious facts: the barkeeps were gone
And, he noticed, during Virgil’s litany
The barfly in the corner tying one on
Was following this one-sided conversation.

…Again involving Mr. Music’s mistress –
What was her name? Oh, hell! (Sorry, Sir!)
But that’s it! Hell – hell – Helen Crosby! Yes!
I’m sure of it. Strong paused. It makes me sore,
I must confess (It’s just a harmless figure
Of speech, Sir, but apologies, of course!)
As I was noting, it’s just like a whore
To fail to keep appointments. This will force
The Master’s hand – and you know how he hates remorse.

“What do you know about Helen Crosby!”
Interrupted Lytlewood. “And who the hell
Are you! I’m dying, as you correctly
Surmised – but look, the joke was going swell
Until you mentioned… Helen.” His voice fell.
“Please tell me. What the hell is this about!”
Exactly so, dear Mr. Lytlewood. Hell.
And we have just the place for down and out
Fatalities like yourself. Let me explain it

By taking all your questions one by one –
No, better yet, let this answer for all:
This cocktail party (which cannot begin
In fact until Ms. Crosby’s arrival)
Is in your honor. For being faithful
To the Master, we’d propose a fitting toast –
Except the whore prevents it – so until
She shows, the Master has but one request:
It would be best to ignore that nosey goddamned priest.
Posted by JOB at 8:33 AM