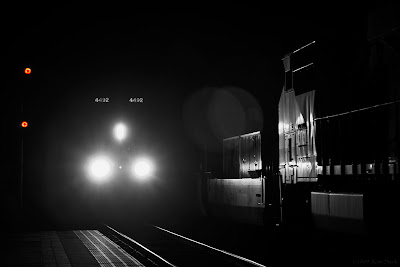 Lost in sorrow’s thickets, the cleric missed
The coming thunder, steel gnawing down
On steel, the grind that crushed and pushed and pressed.
And Lytlewood, abject with abstraction,
Ignored the nearing lights of the station.
In lonely vigil, only Lonnie heard
The train approach the town – its combustion
Now sweeping like fate’s engine forward toward
The platform, a cargo of revelations on board.

The gravity and steel strained to a stop
Before the platform. Nervous clustered knots
Of those awaiting departure took a grip
Of bags and baggage, memories and regret –
And those awaiting arrival of debt
Assumed and endured now scattered to see
Before being seen, hoping to forget
The argument, the tiff, the row, or free
One's conscience from some latest infidelity.

Amid the crowded station’s fervid come
And go, the thick-chested man rose and reached
For baggage overhead. His head went numb
And slumped over – until darkness encroached
Upon his sight and gravity unstitched
His dozing mind in momentary dread.
But catching himself, he stood again, latched
One hand to bag and one upon his head.
His feet felt for the platform with the weight of lead.

Through his faintness Lytlewood thought he saw
An obese figure make its way from shadows –
Waving to him, the man lacked thumbs, his jaw
Hung like a dog’s. In clean accounting rows
The memories started adding up and rose
To meet him – that same fat body hog-tied
With phone cord; that same jaw in twisted throes,
And thumbs jumping from his hands as the blade
Performed precisely: action owed and suffering paid.

The moment Lonnie saw old Lytlewood
He knew that something about him was wrong.
He seemed an apparition as he stood
As if about to faint. “It’s been too long,
Mr. Lytlewood!” His words seemed to hang
Too long before Lytlewood made reply:
“You…what? – why you?” “I’m here to help bring
Your baggage and things to The Burgundy.”
“Lonnie Cash – yes, that’s your name? – I’ve come here to die.”

* * * * * *
“I shit you not, Peyton, it’s what he said,
On God’s honor,” Lonnie explained back at
The hotel. “Also, he said he’d be dead
In hell, he said, before the night was out.”
But Peyton half-listened and, half in doubt,
Regarded Lonnie’s news as if received
Without the bona fides of proper bullshit.
“I think, dear brother, you falsely perceived
(Big words always got to Lonnie) and thus believed.”

“Well, all’s I know is he don’t look so good;
He got these shakes – and driving here I saw
These dizzy spells possess him. Lytlewood
Ain’t Lytlewood is all’s I’m saying now –
He even told me, ‘Take it nice and slow
Through downtown’ – which added a whole half-hour
Because we drove by this old whorehouse so
He could, I don’t know… something to remember,
He said, holding hard the while to some kind of folder.”

When Lonnie finished Peyton began to hum
And think and hum and…. Lonnie blurted, “What!”
The office light was shedding from its dome
Unsettled shadows on Peyton’s balding nut.
He leaned into the cone. “Well look, here’s what
I say we do: if Music’s golden goose
Is getting ready to kick the bucket –
We need some way to find out what that goose
Is going to do and whether it’s meant for us.”

“Remember that Music demands his men
Have to be registered Catholics to play?”
Continued Peyton. “He held confession
A good way to keep his men honest and fey
For blood." “Fey?” “Shut up, Lonnie, and listen –
So Music kept on his payroll a real,
Honest-to-God priest who heard all the sin
And nonsense of Music’s men. Then he’d squeal
Afterwards to Music. The trick would never fail.”

“What trick?” “Oh, Lonnie, clam it, for Christ’s sakes!
The trick was to confess and keep close tabs
Ensuring no one came with higher stakes
To Music’s table. Nothing up for grabs –
You see? You put a fear of God in rubes
And they won’t play you for one, or abuse
Your confidence. So we find a priest that gabs;
We make it so he don't know it, set him loose
On old Lytlewood – and if he doesn’t refuse

He’ll have to be thinking Music's being thorough –
And maybe he’s dying for sure – well, will
He refuse a priest? One way or not, we’ll know
If Mr. Biggy Lytlewood is ill
To death.” “And where’ll I find a priest that will
Want to?” Peyton smiled wide. “Well, as I see….
That rummy from St. Placid’s fits the bill –
And it so happens that he’s currently
Buying up the bar. He goes by Father Andy.”
Posted by JOB at 2:00 PM