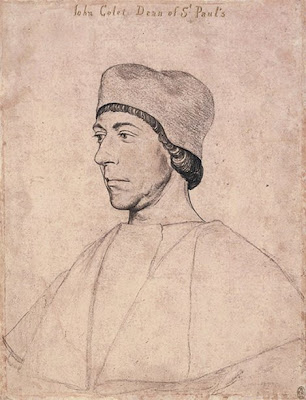 “Holy shit. That’s what we are, my dear friends
In Christ” – Father Andrew Overbee sat back
From pen and desk. Holy Shit? That depends
On more distinctions than thy rhetoric
Hath dreamed, he thought, No, no. Better to stick
To boilerplate, Andrew, and besides, it sounds
All too Protestant… He knew his homiletic
Style already put him well out of bounds
With Bishop Linseed and his diocesan hounds.

So Father Overbee killed his sermon
For Sunday in utero, crossing out
Its only sentence. Best goddamned line on
Things in a while. But wasn’t meant to be,
He thought as he cast his gaze at
A page torn from Time he’d tacked to his wall –
The famous Holbein sketch of Dean John Colet –
The softened eyes affixed, half-skeptical,
As if gauging the grill of a confessional.

Instead of starting over, Father Andrew
Blew flatulent ruminations from his lips.
He rolled his eyes, paused, and suddenly threw
Down his pen. He looked at his fingertips
And joined them – then let the steeple collapse.
Leaping up, he took, in three strident bounds,
The distance from his chair to his relapse:
The beer can’s hatching crack – this best of sounds!
Thought Father Andrew – provided motive and grounds

For his recovering recovery
From alcoholism. He downed the can
In three hungry gulps, then belched: "Oh-verr-bee-
You-lush"" He knew that his next confession
Would include a Budweiser commission
And half a case of Milwaukee’s Best
Beforehand, to muster up enough spin
To twirl around the usual manifest
Of sins – to save, of course, his mortal best for last.

So Father Overbee began to move
From room to room, wandering the rectory
In search of ideas to rescue and love,
To mollycoddle in discovery,
And raise the blade of reality
(As Abraham would unbloodied Isaac)
Above his intellect: Thursday's homily
Of fear and trembling – mental disconnect –
And fear and loathing –Deny! – usually to redact

On Sunday morning: In his years (the last
Eleven at his current assignment –
The moribund St. Placid’s) as a priest
For God’s Rabble, Father Overbee spent
His time interring old ground for talent
He may or may not have buried alive.
The Long Ago of youthful resentment
Had softened into middle-aged reprieve
Confirmed with liquor – all the better to believe.

It was a bargain he made with his flock:
The parishioners keep a friendly distance
And, playing the equidistant cleric,
He guarantees some kind of real presence
By keeping faith in words, an allegiance
That split infinitives into sermons
And baptized syntax with sly inference.
Yet even as God’s shadow determines
The form, he thought, matter’s meaning dims the world with sins.

The solipsism was never his style
But he had separated himself from
The world, pursuing faith in partial exile.
His library consoled – but played it dumb
When critical interrogations came
And knocked on his door. His caged parakeet,
Jeremiah, waited, perched in the front room.
Preparing Father, this shrill paraclete
Enthralling souls that came in off the street. Twit tweet!

Twit tweet! The song sung now pulled him up short –
For day had long since concluded its terms.
Who should want counsel now?! With a brusque snort
He reluctantly dropped everything: the forms
And manners of life, mysterious charms
Of social survival; due sacrifice
To quotidian gods; liturgical norms
For ordinary life – which all suffice
To say his fellow man became his daily cross.

The knock foretold fulfilled the prophecy
Of Jeremiah’s song – announcing each guest
A ghost of grief for Father Overbee.
Half-heartedly hiding his mild disgust
He met Mrs. Conway, parish liturgist
And secretary. Halting her entrance,
He quickly stepped out on the porch and made fast
The door behind him, stealing a quick glance
At something she was holding in her vein-blue hands.

“A good evening to you, Father Andy,”
She said. And her sour-tart smirk said in turn,
I piss you off when I call you that, don’t I?
“And to you,” he replied. “And your concern?”
“Oh, well, I just wanted to come and return
This bit of mail I’d taken home by…chance.”
As he took it he noticed it was torn.
“I think it’s something of some importance,”
She added as he saw the seal, “– from His Excellence.”

He waited for Mrs. Conway to leave
Before attending to the envelope.
Prepared for all, he was not so naïve
To think its contents held any good hope
To come: it was, after all, the Bishop.
Upon a careful read, he went inside,
Retrieved a beer and came back to the stoop.
The Six O’Clock – its whistle opened wide –
Resounded in the distance. He sat down and cried.
Posted by JOB at 7:57 AM