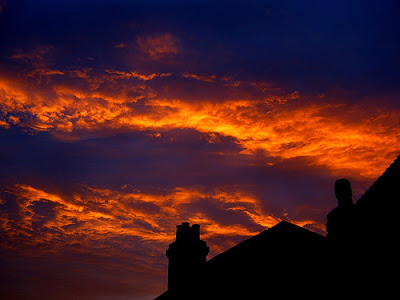 “Holy shit…” Biggy groaned, his eyes shut tight,
His mind in momentary suspension
Before resuming gravity’s upward float –
For he was dreaming of resurrection
And drowning, day and night, a rising sun,
And light and light…His hooded lids snapped wide
To see the first golden tendrils of dawn
Unfold across the rooftops. From his bed
He tried to consider which kingdoms to divide.

But something was wrong. Had he but believed,
Body and soul, in the body and soul,
And not the body only, he might have lived
To see his life in more than terms of will.
But it came to pass that the world was ill-
Conceived this morning. Lytlewood awoke
And found the world the way he left it – still
One fact, but now divorced, as if it broke
From his will, amputated in a single stroke.

He raised his skull from his pillow, a head
Burnished in laurels of foxfire crimson
And balding in corruption, noble, staid
As Caesar’s bust. But the latter season
Of his pate belied the high green of June
That flourished, trunk and limb, beneath his clothes.
Still, as he swung his feet from bed linen
To floor, with shaking nausea bile rose
To meet his false youth with age, his vain works with days

Long passed. “Today I die,” said Lytlewood
To his burnt reflection in the smoked glass
Surmounting his nightstand. Half out of bed
He hunched and stretched his hand where a small mess
Of sleeping pills had spilled. The half-darkness
Half-hindered his search for the telephone.
His hands concieved receiver and mouthpiece
Plucked from the cradle. Clenched at like a bone,
He put it to his ear and, not waiting for a tone,

He dialed. Waited. And spoke like one
Who learned to talk to himself, one marooned
With his own voice for more than a million
Seasons. “Yes. I want you to go and find
Two airplane tickets to Miami and
The cleanest whore in town. I need to go
Away awhile… What? I see. A demand.
Not a request. Well. Music would know.”
He hung up and woke up: Where Music sends, I go.

Biggy Lytlewood was not one to call
Rapacious, but he knew how to “acquire.”
The Money – not some, not even most – but all
Was his task as underworld stockbroker:
Attracting attention among the higher
Dominions, thrones and powers, Reynard Lytlewood –
His name before his name became bigger –
Determined his own course, for bad or good,
Relieved a man of his gold as any stone of blood.

He took a comet’s path in his career
Among the other orbiting bodies
And watched from his own insulated sphere
The rise and fall, the wax and wane, surcease
And excess, this universe of chaos.
To his game surprise, he survived, and thrived
To see that murder, bribes, and rank abuse
Of power, sex and money, had moved
His orbit into circles more and more depraved.

Of these, none had more perfect compass than
The machinations of Frankie Music –
His was a total system: he the sun
Around which revolved Lytlewood’s logic
Of tally sheets and body-counts. In quick
Succession Lytlewood rose through the ranks
Of Music’s syndicate. His bailiwick
Was making Music the Baron of Banks
And himself, touched as Midas, horrid as the Sphinx.

It was the face of that deceitful god
Of waste and nothing, that blood-lusty beast
Of riddle and mirage, which now with stolid
Expression stared at itself, holding fast
Its gaze upon the bathroom mirror, cast
Out deep (and thus in deep) to find the cause
Of sickness. Impassive as a clenched fist
He knuckled up the passing pain, his face
Unmoved, its golden whiskers creasing time’s increase.

When pain subsided, it left Lytlewood
In weary contemplation: what to do
Now that mortality had come and stood
Beside him? Say farewell? Miami grew
Insignificant – and whores the more so.
He doused his face and neck from the basin
Of shaving water. Suddenly he knew
Where he would go – a place half way between
Where we would be going and where he had been….

“You’re all set, Mr. Lytlewood. Your train
Arrives in town a little after six –
About sundown. At the station a man
From the hotel’s due to pick you up and fix
You up in penthouse suite Six-sixty Six,
As you requested.” Meyer, his chauffer –
Efficient and discreet, handed tickets
To Biggy, sitting in back. Over his shoulder,
Meyer spoke the way he drove – with purpose. “This folder

“As well, is from Mr. Music.” He passed
It back. But Lytlewood already knew
What the file read: Assignment – his last.
So what did it matter which stone he drew
The blood from this time? He guessed his would flow
Soon enough…. But we leave to meditate
On his yesterday and his tomorrow
One whose will is lost to a present state –
To meet another lost in time’s eternal debate.

Photosource
Posted by JOB at 8:28 AM